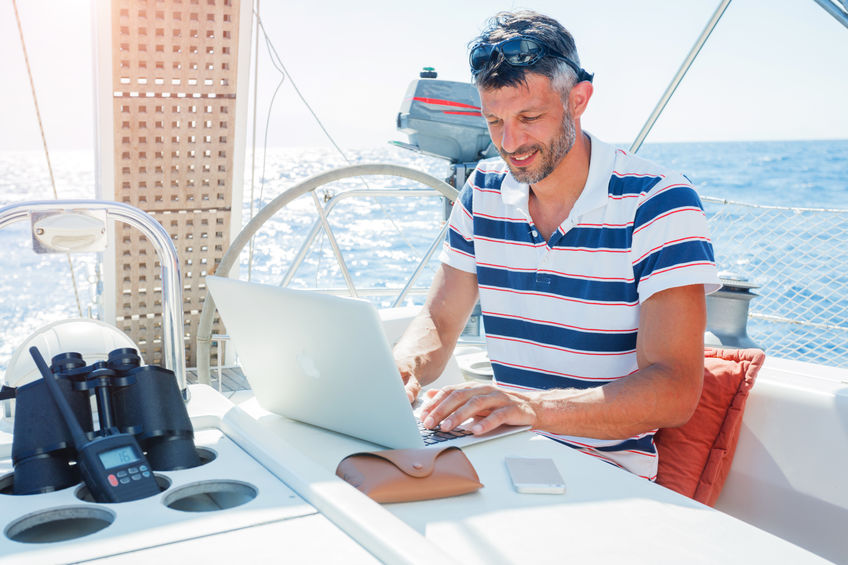 Office on board: smart working sailing

The year 2020 brought – among other things – a novelty that has brutally entered the life of many of us, and that is destined to stay with us for a little while longer: remote working. This new modality is involving millions of people around the world and – you bet – it is destined to enter on a permanent basis the life of many, even after the pandemic is over.

The novelty interested our world too, and for the ship owners remote working can mean working on board after leaving the moorings. This charming option offers precious social distancing and a lot of family time, but requires preparation and equipment to choose carefully, ensuring fast and seamless connection at sea.

To be honest, these systems didn’t show up on board last year. Connectivity and the possibility of running a business from the South Seas is a fascinating aspect we have always envied the ship owners of the fabulous super-yachts we happened to meet at sea or in some bay. However, nowadays, this possibility has leaned for us ordinary mortals, who want to combine the need to smart working with the pleasure of sailing around the seven seas (if the restrictions allow to).

On boat, you can’t be “wired” and so all communication systems travel by radio. Satcom systems offers the greatest possibilities, in terms of cover, which ensure cover even when sailing in open sea.

Many systems, though, have one problem: the data exchange speed. The provider and the amount that the customer is willing to pay determine the data exchange and the uplink/downlink speed. If you only want to send an e-mail or make a phone call, lower speed connectivity works. However, if you need to join a meeting on Zoom, or make a video-call, or host a webinar, it requires a greater bandwidth.

In general, a transmission plan that offers minimum speeds of 2 megabits per second for both uplink and downlink data is enough to support e-mail, the business management software and perhaps a video-conference. For reference, Apple’s FaceTime and Skype both require speed from one to four Mbps.

In short, given for normal the presence on board of personal computers, printers and other smart devices, the most important prerequisites to create a practical office on board are the satcom systems.

For these systems, two are the main ingredients: solid equipment mounted on the mast or housed below deck and the network of satellites that this equipment uses to send and receive data.

Ship-owners can invest on an open system, purchasing equipment from a supplier and data transmission services from a third party provider; otherwise, they can install an end-to-end system, with equipment and transmission time of the same company.

Both options have pros: open systems allow yachtsmen to choose manually the providers during the cruise in areas where one could provide better coverage than another one; while the end-to-end systems offer continuity and a unique contact in case of problems. Let’s do an overview to discover the main players in the global communications market.

One of the main managers on the scene is British consortium Inmarsat that was born fifty years ago, and includes institutional and private actors from more than 80 countries. The network is based on geostationary satellites, orbiting at a height of 36,000 km, with a very large default coverage area (Pacific Ocean, Western Atlantic, Eastern Atlantic and Indian Ocean).

Inmarsat was created in 1979 as a World Intergovernmental Organization for the Development and Management of Satellites for communication with naval vehicles. Later, its activity extended to communication with aeronautical and terrestrial mobile vehicles, and to transportable ground stations for special services (emergency, reportage, etc.).

With most complete Inmarsat systems you have a global cover at latitudes between 70-75° North and South, while with simpler systems of smaller dimension the coverage is smaller, since it’s serving the busiest areas (minimum 200 or 300 miles) and routes.

The northen Atlantic, including all equatorial belt, is fully covered, but going south of the equator, between the African and the South American coasts, there’s a zone in which the signal is unreachable. Even more consistent are the coverage problems in the Indian Ocean, away from the coasts, from 20° North up to the very wide range between Australia and Madagascar. The South Pacific has a great grey area from 10° South to 500-600 miles from the South American coast.

Instead, Iridium is a consortium of US origin based on a constellation of 66 satellites that, revolving in a low orbit about 800 km from the ground, provide a strong enough signal to be received from slightly larger and heavier terminals than ordinary mobile phones. It is the only system with actual global coverage. The big advantage of Iridium is also that satellites do not only communicate with earth stations, but are also able to exchange signals between them. It ensures vocal communication, data and fax with a 2400 bps speed. It also provides a series of messaging services such as the voice and text mail with a personal mailbox. The terminals are a little bigger than a phone, but they often have a foldable antenna of considerable size.

Globalstar is based on a network of satellites in low orbit that that allows using portable terminals. The system allows considerable savings since, thanks to the roaming agreements carried out by the consortium in recent years, in the presence of gsm coverage (therefore in the harbour zones and in proximity of the coasts) the terminal behaves like a common mobile phone, without even the need to extract the bulky satellite antenna. Satellite coverage is wide between 70% N and S but not global.

The areas that give the most coverage problems are Africa, India and most of the Indian Ocean, together with all of South Asia, including Southeast Asia. There is a blackout zone that includes almost all of Central America. Australia is well serviced as long as you do not stray too far from the coasts. New Zealand is almost entirely covered, as is northern Japan.

Thuraya is a satellite phone system that uses a geostationary satellite able to provide coverage over 40% of the Earth’s surface: including Europe, the Middle East, India and part of the Indian Ocean, Central Asia and North-Central Africa. The system is improving and expanding. The terminal is the size of a common Gsm able to make calls in presence of the network. In the absence of cover Gsm, you can activate the satellite network by extracting the dedicated antenna to improve reception.

Emsat (European Mobile Satellite Phone) is a mobile system for satellite communication and it covers the all of Mediterranean area and central and northern Europe. It uses the satellite Italsat F2 designed by Esa (European Space Agency) and the earth station Telespazio, which provides interconnection with the common telephone network. The operating frequency is in L-band (1.5-1.6 Ghz). The terminals consist in a central unit, a mobile phone and an antenna. Emsat provides voice (4,8 kbps digital), fax (2 kbps group 3), data (2,4 kbps). Therefore, in addition to phone calls, it allows to use an e-mail box as long as you do not send too “heavy” files.

You should take in consideration the cost for any satcom client. That is why the experts recommend calibrating and designing very well the combination of on-board equipment and net. A 1 m antenna is the optimal size, since the bandwidth cost is lower at the same speed than a 60 or 70cm antenna. It is more expensive for data transmission providers to send signals to smaller antennas; in other words, we can say that ship-owners are wise when they choose the biggest antenna that they can install on their yacht.

Geography is the last point to make. Years ago, while ships sailed all around the world, the crew had to replace the radio frequency component module of each antenna, so that the system could use regional systems. Those days, luckily, are behind us.

Nowadays an antenna works all around the world without changes, and the satellite systems are enabled for GPS and they know which satellite to track. Latitude, however, is still an obstacle. Since satellite communications are inline and since geostationary satellites are located above the equator, yachts that sail in high latitude zones have to point their antennas towards the extreme southern horizon.

In certain conditions a blockage may occur caused by simple physical “coverage”, such as a cruise ship, which might block the signal. For this reason, many yachts have double antennas for satellite communications. If one is blocked, the other one is still online.

Overall, and here we come to the sore side: to equip a yacht as a floating office the costs are not trivial and they depend on the complexity of the system you have chosen and on real needs and communication volumes. But, let’s say it, the possibility to work from the boat is priceless. 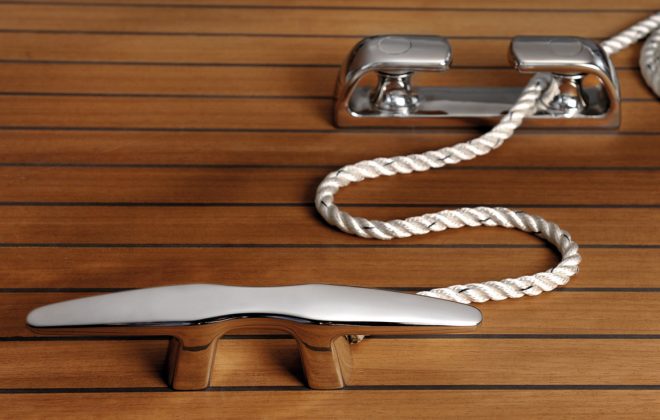 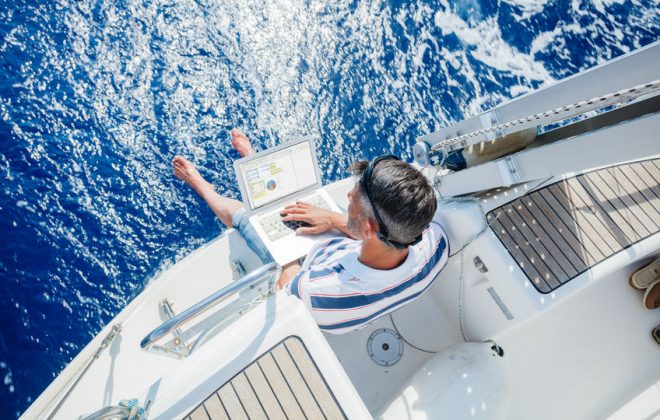 Internet on board: how to connect in and offshore 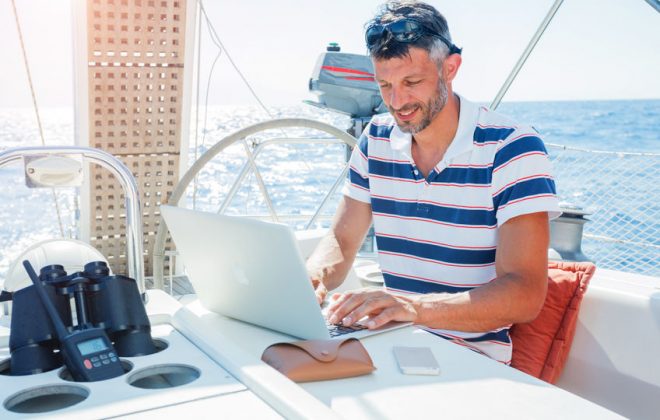