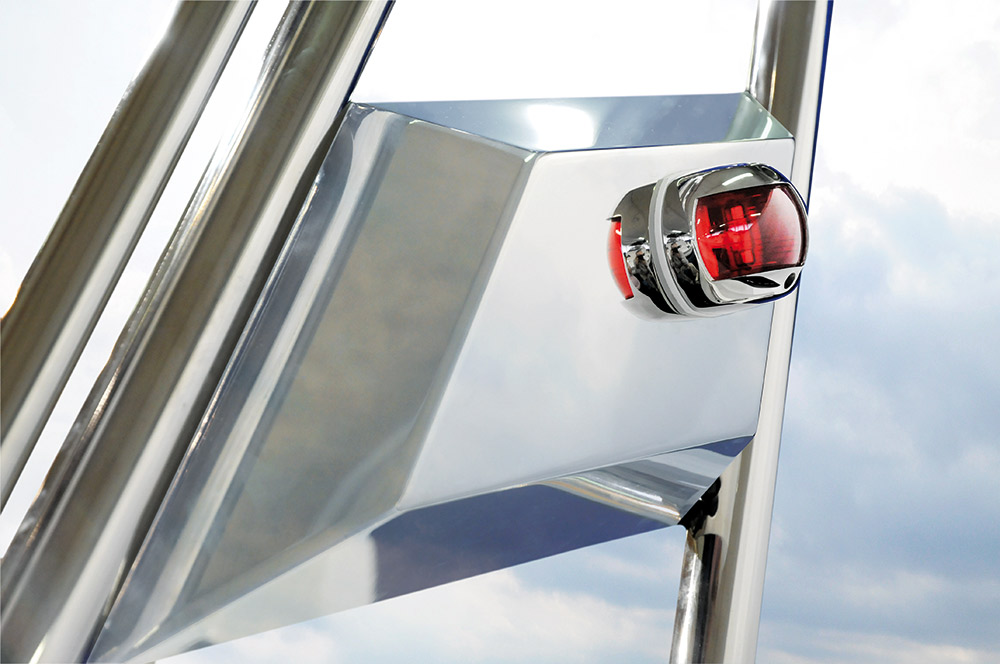 Navigation lights: shall be paid much more attention than we usually dedicate them

Let’s start with the mooring light: contrary to the common belief, it isn’t true or useful that the vessels at anchor must have a single white light installed on the masthead.
The rules set to prevent collisions at sea (COLREG Rule 30, subparagraphs i and ii) prescribe that a vessel at anchor shall exhibit an all-round white light in the fore part and an all-round white light at the stern at a lower level. This also signals the position of the anchor chain.
A vessel of less than 50 metres in length may exhibit a single light.
In short, a vessel at anchor during the night shall exhibit where it can best be seen an all-round white light; additional lights can be installed provided they are white.
Nowadays all vessels are fitted with a bimini top, which obstruct vision upwards. While moving in a roadstead in search of an anchorage point, maybe while it’s raining and in poor visibility conditions, visibility upwards will be likely not to be enough to spot a light installed on the masthead of a sailing boat!

Many mooring lights are mounted on masts having a large platform where stay and backstay are fastened. This generates a wide shadow area that makes the mooring light visible only at a long distance.

Therefore if you are at anchor during the night I strongly recommend to place solar power lights (similar to those used in gardens) in the fore part and at the stern. Specific marine models are available on the market.

Navigation lights – Green and Red (112.5° on each side):
In the original text in English they’re called sidelights, meaning the Green and Red lights needed to determine the position of vessels we cross as compared to ours so we can understand whether we have priority and identify the correct manoeuvre to prevent collision.

The rules (COLREG ANNEX I – Positioning and technical details of lights and shapes – 9. Horizontal sectors)
The COLREG rules prescribe that sidelights shall be perfectly aligned and that they shall show the minimum required intensity. In this way a vessel seen from the fore will exhibit both a green and a red light; as soon as it hauls by 5° to port or starboard only one light will be visible so that the observer has a clear perception that the vessel has changed its route. 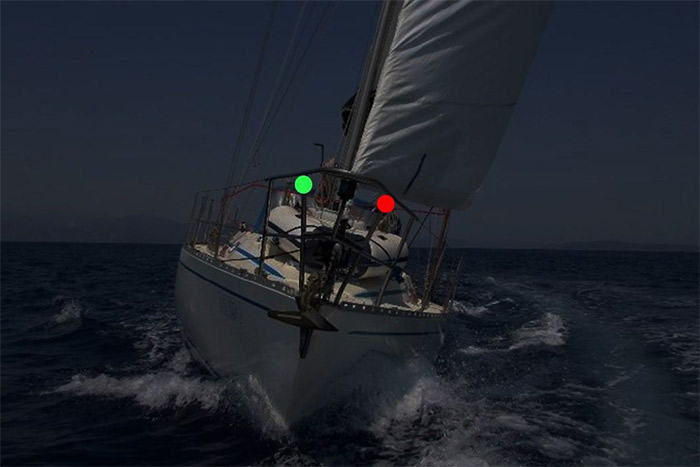 Vessel seen from the fore

If the beam angle of the lights is correct and if the lights are correctly positioned – and the vessel we previously saw hauls to port or starboard – we will have a clear perception of the manoeuvre.

On the other hand, if the beam angle exceeds the prescribed limits or the lights are not correctly aligned, even if the vessel has hauled by several degrees to give us room, we will still be under the impression that it keeps heading at us, driving us to take a wrong decision. 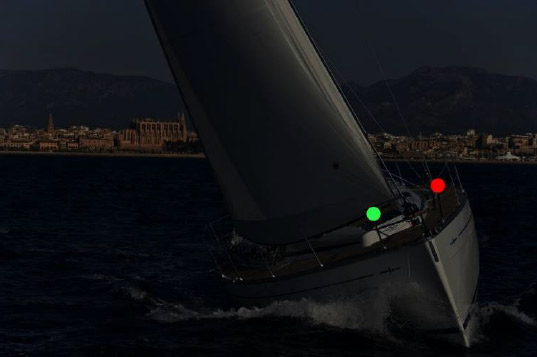 In the same way, if we think the vessel is heading its fore against us, we will haul to starboard according to the rules thus risking collision (see picture on the left). 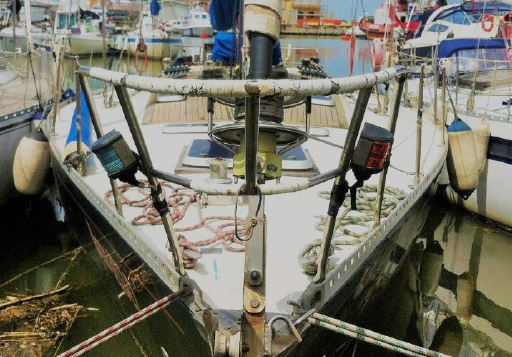 Simply watch how lights are positioned on boats at anchor to realize that in most cases installation is wrong. In the side picture, navigation lights have been installed in converging positions that follow the pulpit lines instead of being parallel.

The wrong beam angle of navigation lights generates from different mechanical problems: incorrect installation, an impact that modified the light position, an inherent fault of the navigation light, etc. The correct alignment of the lights needs therefore to be frequently checked.

A current trend is to replace regular incandescent bulbs with LED ones benefiting from all relating advantages. Yet attention shall be paid when replacing traditional (type-tested) vertical filament bulbs with LED bulbs in navigation lights: this might often cause serious troubles (see explanation here below) and make the navigation light not complaining with regulations.

Steaming light – White oriented towards the fore (225°)
The steaming light or masthead light (not to be confused with the mooring light) is a white light having a 225° beam angle towards the fore. This light has to be positioned at a higher level than navigation lights.

Sailing boats under 20 metres, during sailing can have a single green/red and white stern light installed on the masthead. In a powered sailing boat the steaming light shall be installed at a higher level than the navigation lights and therefore the combined masthead light cannot be switched on. The vessel shall also be fitted with side lights located at a lower level (on the bow pulpit): these shall be kept on in addition to the steaming light mounted at a higher level than the navigation lights. 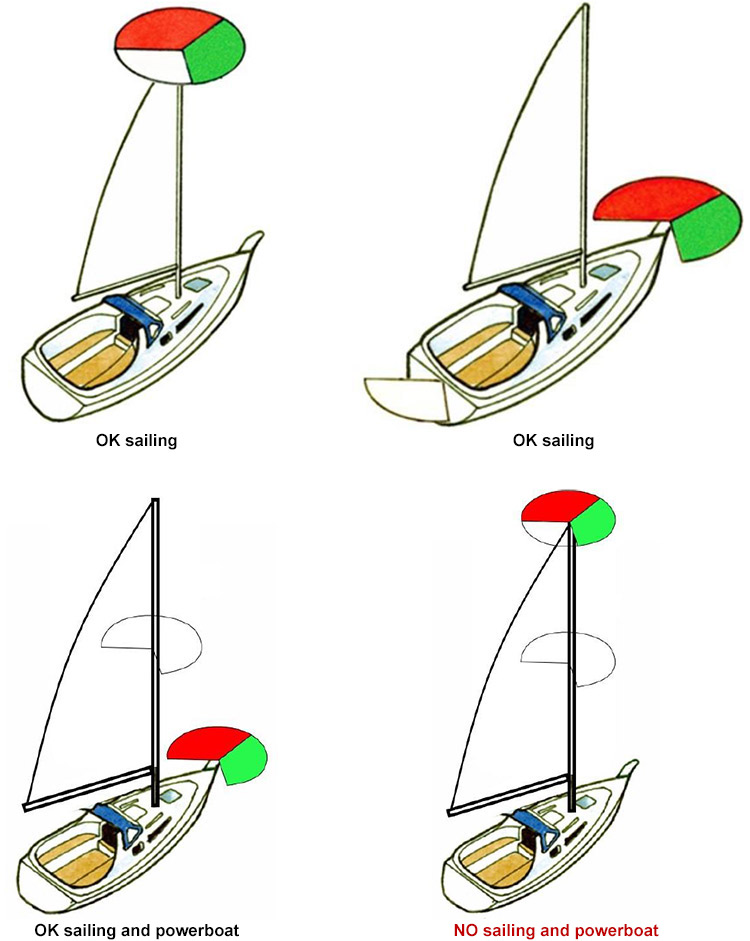 When the combined green/red masthead lights and the white steaming light at a lower lever are on, our vessel can be mistaken for a drifter or a trawler. 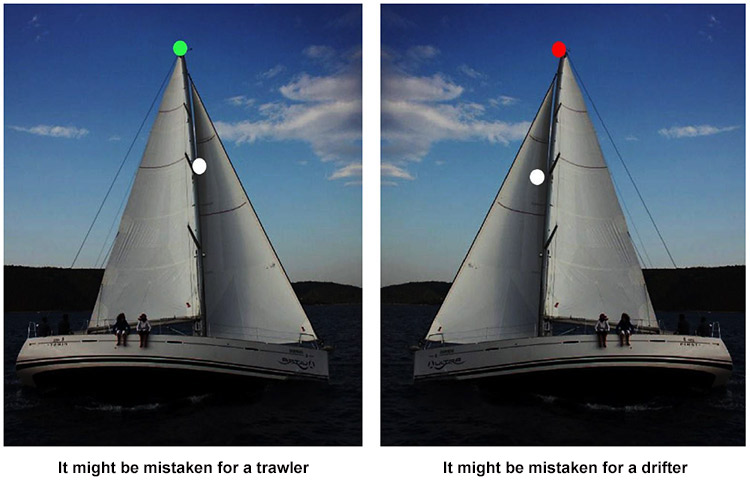 This is even more so for sailing boats than for motor boats: in the latter lights are in fact mounted on the stiff parts of the hull, which are less prone to impacts. Moreover the hull screens the possible wrong beam angle.

As for the mooring light, it is installed on the A-frame at a much lower level than on a mast.

These short hints should warn pleasure boaters and invite them to install navigation lights correctly on their vessels. 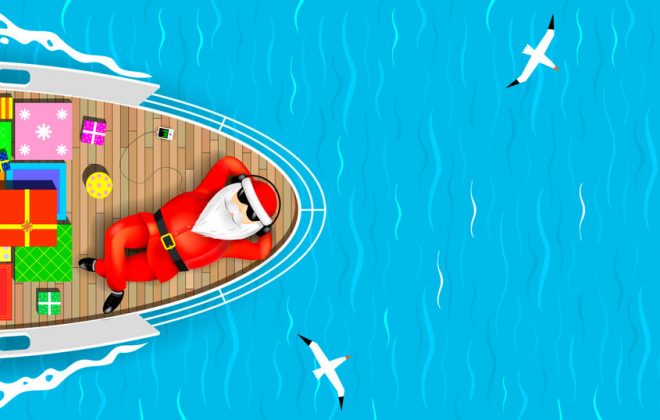 The sea under the Christmas tree

When you say out of hand: Point Nemo myth and reality of the remotest point of the globe 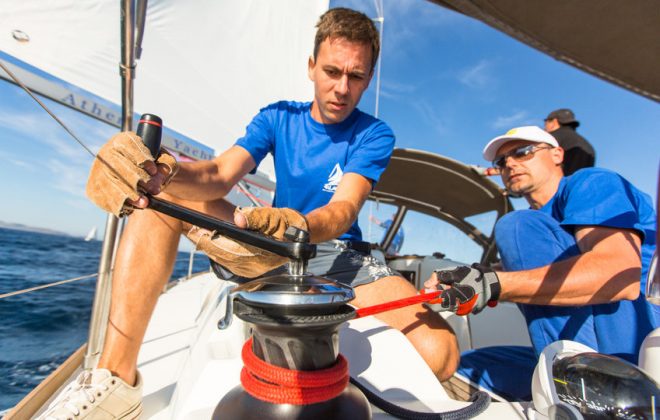